Order: The Drentsche Patrijshond for the North American fancier via Blurb's Print on Demand Service. 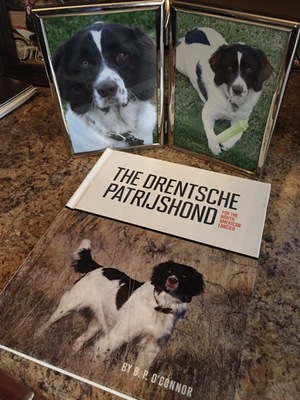 "Dutch", photo courtesy of Scott Conley
There are basically two ways of writing a breed book. One requires effort and It involves researching a breed in detail, interviewing long-time breeders, owners, hunters and club members, seeing and photographing the dogs in the flesh, travelling to the breed's native land etc. etc. The other requires virtually no effort. All you need is access to wikipedia, a delusion that you can make a quick buck selling cheap, print-on demand-books about dog breeds and, most importantly, a complete lack of scruples. The Drentsche Patrijshond for the North American fancier, is not a product of the 'no effort' method, it is however an excellent example of doing it the right way!

With a forward written by Gun Dog Magazine's "On Point" columnist, Dave Carty and photography contributions from Craig Koshyk and others, its been said the book will be the face of the single breed book.

Nearly eight years in the making, The Drentsche Patrijshond for the North American fancier is no ordinary breed book. It is a treasure trove of information gleaned from some of the most influential Drent experts in the world and the only guide on the breed to be written in English. Written in an easy-to-read conversational tone, it covers all aspects of the Drent that are of particular interest to North Americans and is illustrated with stunning, full-color photos of Drents at work and at play.

This is what people have had to say:

Your book is fabulous.  I really enjoyed reading and the beautiful pictures. - Karen J.
Excellent book on the breed. It sets the standard. - Marc G
Hello Brian, I just wanted to let you  know that Paul, and I, are enjoying your book.  I gave it to Paul under our Christmas tree.  He was very impressed with your research, your sense of humor and the recipes.  We both want to thank you for your enthusiasm for breeding these magnificent dogs.   - Barbara D
It looks great Brian and I mean it!  Got to read it page by page through...I love the photos!  (Which Drent freak wouldn't?!!) - Sonja P
Just got my copy of Brian's book.  Thank you I can only attempt to guess how much time and effort has been used...Big project. Easy to see Brian's passion for this breed and his dogs.  - Tim O
...very cool. The pictures were great and it (the book) was a nice enjoyable read with lots of pertinent info. - Fred D
I thoroughly enjoyed your book.  It was written in a wonderful heart to heart style.  Thank you again for all you've done. - Bonnie P.
Brian,  Wow - what a great book.  We just got home and had a chance to have a look.  It's beautiful... daughter Addison and I both want to keep the book in our room.  She will likely win.  Thanks the wonderful craftsmanship and the contribution to understanding the breed here in the U.S.
- Aaron R.
Brian,  I have read your book through twice and spot read it multiple times. Great job!  I loaned it to a friend and he too highly praised the book, the information and outstanding pictures.  Thanks for taking on that venture...for sure it will have a long standing positive effect on the breed!
- Garland M.
Hi Brian!  Just wanted to ﻿let you know we received your book and it looks wonderful. Have not read a lot of it, as it arrived yesterday. My son is very excited to be able to read up about his best buddy! He is 17, and loves his Dren﻿t. Great job on the book!  - Bettie K.
Hi Brian, I received the book today and wanted to thank you for not only doing a great book, but being an advocate for the breed.

I got home from the mailbox and read it cover to cover.  You were very detailed in the history and confirmation processes as well as “on point” for describing the breed.  In 2002 I struggled through countless books, videos and so on trying to find the right bread for my family.  I wanted a family dog but a hunting companion as well.  But not a big lab, which many in the family had. I don’t recall where I came across the Drent but it’s traits were perfect, followed by, what do you mean I have to go to Netherlands to have one?

I laughed hysterically at the reminder of the “what ya talkin bout Willis” look.   My wife and I used that saying many times about Dutch, and we still kid around about it    It was like you were here for a moment to witness our experiences and thoughts.   He was willing for almost anything, but now and then he gave the look.   And "prepping"… OMG, the world stopped to watch him go in circles 15-20 times just preparing to plop on the floor, or on top of his foot stool , or leather chair he declared his own.

Thank you again. The personal note was appreciated and the book will remain in my library of books, and referenced often.  - Scott C.
Thanks for my book, got it a couple days ago and love it, great job Brian!  - Jim M.
"Brian O'Connor: Just read your book cover to cover! I love it! Footsie has definitely become Princeton's favorite game" - Laura P. 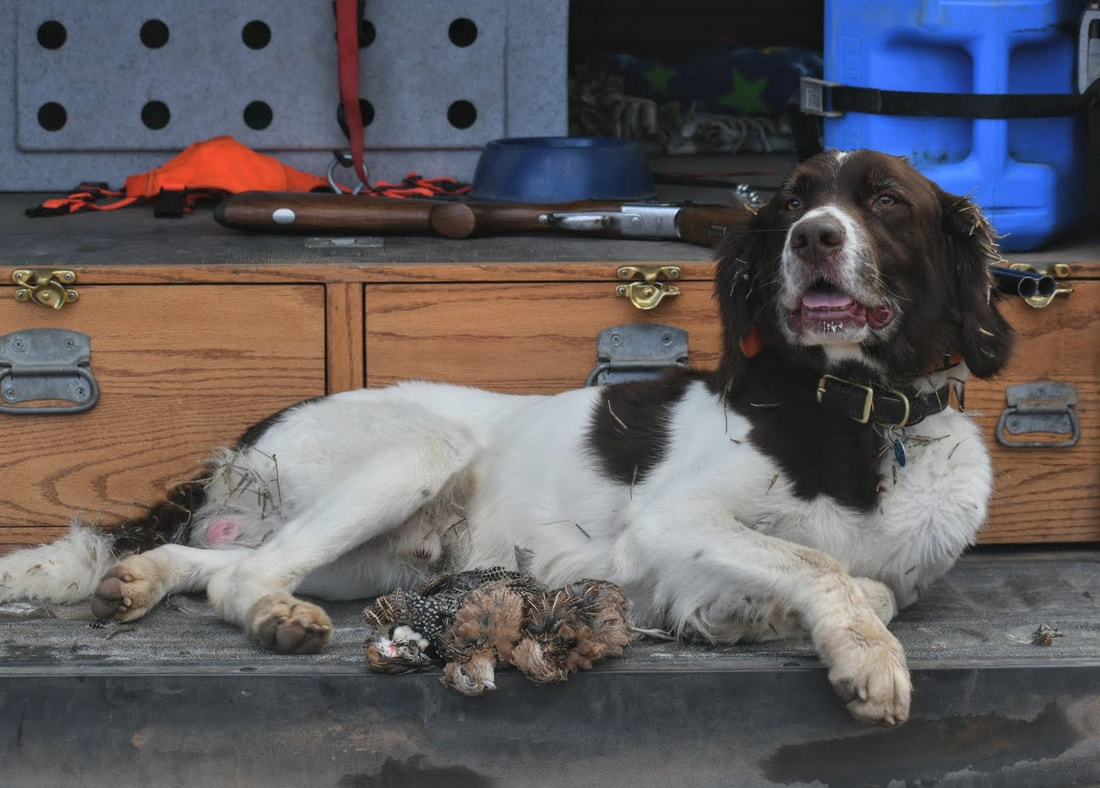 The Drentsche Patrijshond for the North American fancier 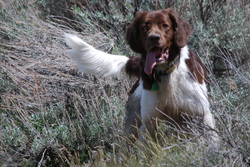 Paxson the Gloucester, one happy boy
Oh, no, not another boring breed book... Well, I certainly hope not!  It has been nearly six years in the making now, nearly a year in design and layout now.

I have written: The Drentsche Patrijshond for the North American fancier, more as a conversation between friends with frank and open commentary on the Drent.  Rather specifically, I put a lot of effort into not producing another boring text book on a breed of dog.  This book will be free of fifty-year-old black and white photos and a small section of uninspiring color photos of the Drent tucked in the middle.  It will have great photography of good Drents!

The design of The Drentsche Patrijshond for the North American fancier will more closely resemble a modern coffee-table book than a traditional breed book, with pages filled with high quality Drent images. This will be a book you will be proud to leave out, and not crammed, hidden, in your back room on your book shelf.

The book: The Drentsche Patrijshond for the North American fancier, is now closer than ever to becoming a reality.  Back in August of 2012 I submitted the first draft of my text to the publisher and I was pleasantly surprised with his remarks. In essence he was happy with the content, my style and delivery, as well as the mechanics of the writing.  I feel incredibly fortunate to have had my work picked up by Craig Koshyk and his new publishing company, Dog Willing Publications.  The quality of craftsmanship his company is becoming known for is something out of the ordinary, truly first class - off the charts, if you ask me.

Also something which makes me pleased is the entire publication process from start to finish will be handled in North America to include printing.  We have just started the layout and design process as of 24 August 2012.  I recently submitted the final text to the publisher on 7 January 2013.  Despite several moves over the course of this project I have manged to get all of the photography submitted to the publisher in the spring of 2013.  We are in the design and layout phase.

14 March 2014 UPDATE: I have received pre-production draft layout book and it looks amazing!  We are on the road to be published soon!

10 April 2014 UPDATE: I have the complete book proof in hand, and it is looking pretty freaking awesome by the way.  As an added bonus I've been bequeathed a few very awesome Craig Koshyk original photographs for the work.  All I have left to do to provide a handful of photo captions, and I'll have that done this coming weekend.